HomeUncategorized The Aadhaar Verdict: What It Means to us?

The Aadhaar Verdict: What It Means to us?

October 8, 2018 By srfincorp Comments are Off 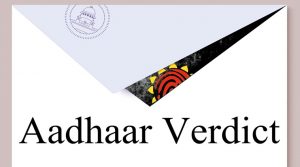 What is aadhaar card number?

So basically, aadhaar card is the number which is given to a particular individual and to make him different from other and to show his individuality. It makes every person unique in itself.

Supreme Court has also abated the earlier law of TRAI on mandating linking of aadhaar number to your mobile number. Now there is no other law have to the effect and there is no other law backing it, so anybody can take a new sim without an aadhaar card. And its open for the legislation to make any law on this.

Private companies, banks, financial institutions don’t need aadhar number, so members or employees can go ahead without their adhar card and company can’t ask for their aadhaar number, its not mandatory.

For the children who are minor, and want to get enrolled under aadhaar act then they need the consent of their parents/guardian, it can be in a form of signature but its needed. And on attaining majority, those minors can get themselves removed from aadhar act, if they want so. They have right to take an exit from aadhaar, if they so choose.

The Supreme Court has upheld Section 139AA of the Income Tax Act, while striking down the PMLA rule that made Aadhaar mandatory for bank accounts. What this means is while Aadhaar will not be mandatory for availing banking and financial services, it will be required to file tax return

Aadhar card is compulsory or mandatory while applying for any governmental schemes like LPG subsidy, ration etc. For that, you will have to give your aadhaar card number. If you are opening any bank account or paying income tax return then you have to provide your aadhar number, because linking of bank account with aadhar card is mandatory. The law on linking aadhar and bank account is upheld by the Supreme Court, so that banks have full details of the customer, with whom they are dealing.

It’s unclear whether aadhar is required provident fund, since it’s the government but an initial reading suggest that its  may not be required for government owned companies.